The latest Google plus updates this March have been based on feedback from users. A few tweaks here and there and then a WHOOPING new big cover photo. 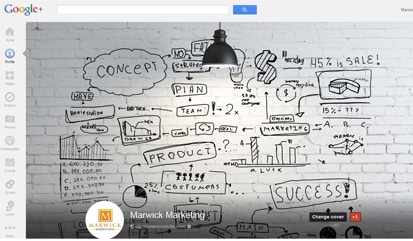 Here is what Google have to say about the Google + March 2013 update:
We spend lots of time listening to your feedback, and today we’re launching some profile and page updates that you’ve been asking for. These include:
– A new tab for your Local reviews. In addition to your photos, +1′s and YouTube videos, there’s now a place for all your Local reviews. Highlight your favourite restaurants, or hide the tab completely via settings — it’s completely up to you.
– An easier way to edit your info. The ‘About’ tab now consists of separate cards (like Story, Places, and Links) — each with its own prominent edit link. As always: you can share specific fields with specific circles, or keep them just for you.
– Bigger cover photos, with a better aspect ratio. Cover photos are much larger than before (up to 2120px by 1192px), and they display in 16×9 when fully expanded. This way more images can be used as cover photos, and there’s more room for your selection to shine.
Everything’s rolling out gradually, so check back soon if you don’t see it yet. Once it’s live (at plus.google.com/me), let us know your thoughts in the comments!

Marwick Marketing has already taking advantage of these updates and has changed their cover photo to a giant design. Take a look here. What do you think? A bit of a waste of online real estate? Just a little jibe at Facebook and their cover sizes (mines bigger than yours…)

What is Google Plus or Google +?

Google+ (pronounced and sometimes written as Google Plus, sometimes abbreviated as G+) is a multilingual social networking and identity service owned and operated by Google Inc. It was launched on June 28, 2011.As of December 2012, it has a total of 500 million registered users of whom 235 million are active on a monthly basis. Unlike other conventional social networks which are generally accessed through a single website, Google has described Google+ as a “social layer” consisting of not just a single site, but rather an overarching “layer” which covers many of its online properties.

Christian is one of Canada’s most sought-after digital marketing experts. He has taken Marwick from start-up to 18th Fastest Growing Company in B.C. (Source: Business In Vancouver Magazine). Well known for helping business owners navigate and dominate the digital landscape. Over the last 19 years, Christian has helped companies attract great customers using the latest in digital marketing. Christian was also the co-founder of CIMC, Canada’s largest digital marketing conference. Christian is also a professional surfer, representing Canada at the ISA World Games in France. When Christian isn’t growing Marwick, and Marwick’s clients he can be found traveling with his family.

Strategies to Use for Better Google Reviews

How To Increase Reviews on Google My Business

Google is Releasing a New, Free Version of Google Shopping